With Teamscale 4.0 we finally released pre-commit analysis, a feature that we and many of our customers have been looking forward to for quite some time. In this post, I will give you a brief overview of the feature and explain, why we are so excited about it.

At Teamscale’s core, its incremental analysis engine updates the analysis state within seconds, based only on the changed files in each commit. This allows us to give real-time feedback to developers immediately after they have committed and enables the retrospective analysis of entire code-bases. We stress this rapid feedback a lot, as in our experience this is one of the key factors for making developers actually improve the code by using an analysis tool.

Is immediately after the commit fast enough?

Many of our customers asked whether feedback after the commit might be too late. Afterall, the code is already in the repository and all problems are recorded there as well. This also manifested in our own reporitory, where many commits are quickly followed by a second one, which fixes any quality defects found.

The obvious solution and an approach implemented by many other tools is to move the analysis to the client and into the IDE. While this sounds like a good idea in the first place, this has several serious drawbacks:

Our answer to these challenges is what we call server-side pre-commit analysis. It works like this: First, the IDE pushes the changed files to the server. Teamscale then inserts these files into a virtual private branch that only exists within Teamscale and performs its normal branch-aware analysis. As our incremental analysis is optimized for dealing with few changed files, the feedback is ready to be displayed in the IDE within seconds.

The developer can use all the same Teamscale features and analysis as for a real commit, but without actually performing the commit. This gives the developer the chance to clean up before actually committing code to the repository. While technically doing many commits is almost never a problem, cleaning up before committing rids the developer of the social judgement he might face for a “bad commit”. 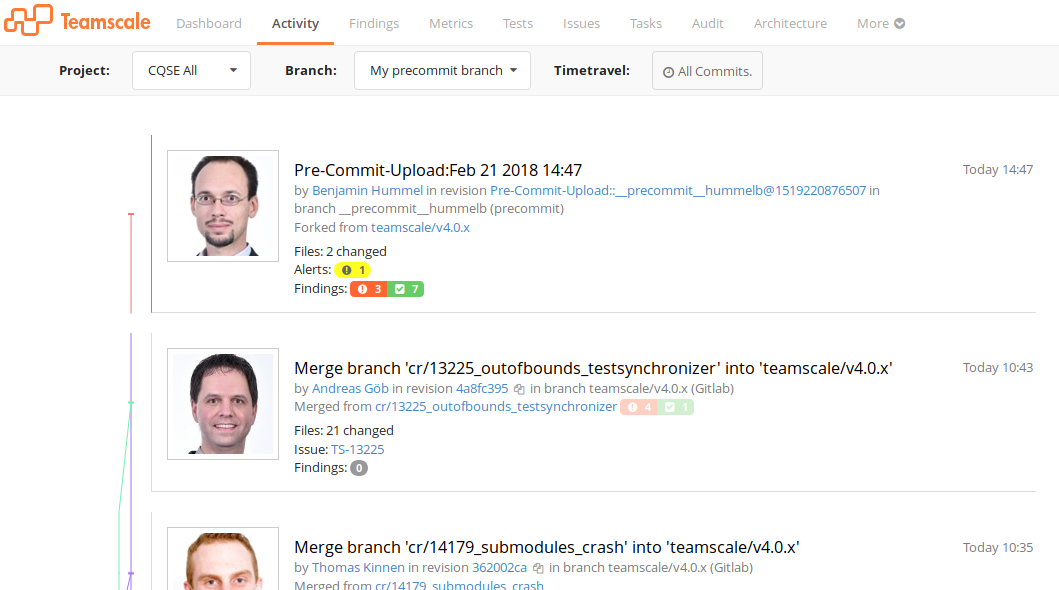 By using server-side pre-commit analysis, all analysis and configuration is kept in the server. The clients only need to be updated, if the upload interface would change. Additionally, as the server knows all the code and all the history of the project, both can be respected during the analysis. An added benefit is that, as the code is (temporarily) known to Teamscale, all features of the web UI can be used. This includes trends, dashboards, and delta analysis.

The 4.0 release enabled pre-commit analysis in the server and the Eclipse plugin. The next releases will then gradually roll out pre-commit support to Visual Studio, IntelliJ and our upcoming Netbeans plugin.

On our mission to support development teams improving their products’ software quality, we strive to support their development process the best we can. To do this, Teamscale has always analyzed every commit on the mainline in the repository for…