The Eclipse Java compiler provides a multitude of sophisticated checks that greatly help to improve the quality of your code. However, to benefit from these checks, it must assured, that all developers use the same set of checks. Only then, rules like »the code may not have warnings before comitting it« can be applied. Obviously, consistency is also relevant for code formatter settings. Hence, for a smooth software development in every team larger than two, the following should be ensured:

Fortunately, Eclipse (with a little help from the version control system) provides a simple solution for all these requirements: project specific settings. To enable them, simply open the properties dialog of the project and enable them for errors/warnings or the code formatter settings. As the screenshot shows, the same thing also works for code templates and the code clean up settings. 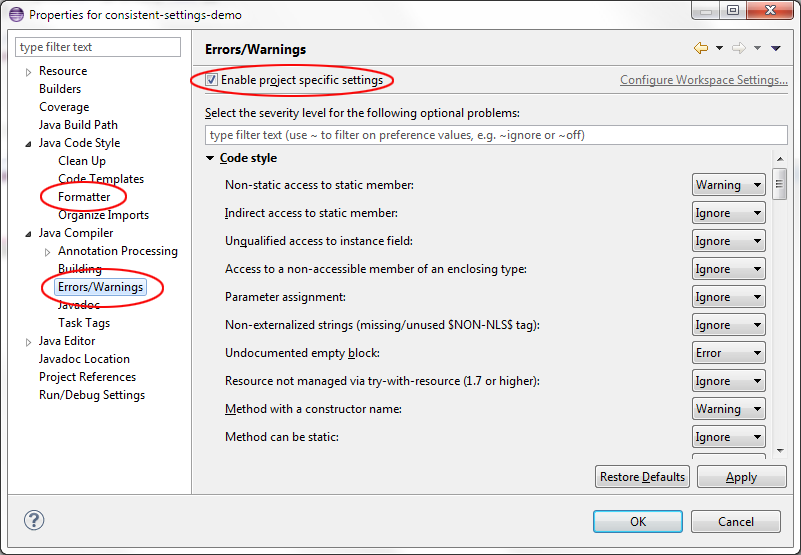 After enabling project specific settings, a folder called “.settings” is created that contains more or less human readable configuration files. To see this folder in Eclipse, the filter for resources starting with a dot must be turned off in the package explorer.

What can happen, though, is that a developer accidentally changes the settings and commits this version. While this rarely happens in practice, it should still be taken care of. One way to deal with this is to use the permission system of the VCS to prohibit committing this file. However, this is usually cumbersome to setup. Another way is to employ a simple step in the nightly build that checks if the settings files have changed. This works well for us.

The described setup leaves one open issue: consistency across projects. To enforce this, we used to employ Subversions “externals” mechanism, so that the “.settings” folders in each project where mere pointers to one central location. As we continuously had trouble with externals, we later replaced this with a simple build Job in Jenkins that checks for each project if the setting files differ from the master. If differences are found, the build fails. This ensures consistency across projects and, as described above, detects accidental changes to the settings files.

If you want to test this solution, you can download this example project and import it to your workspace.