As more and more software applications are operated in the cloud, stakeholders of applications originally developed for another platform wonder how they can make their application cloud ready. This article describes how we answer this question by analyzing cloud smells on code level and cloud requirements on architecture and infrastructure level during a software audit.

Several customers have asked us recently to analyze the cloud readiness of their code base which was originally developed for another target platform such as the (Windows) Desktop. They wanted to know whether their application could be operated in a cloud environment, which problems may occur and which actions they should take to make their application cloud ready.

We approach these questions in our CQSE software audits in two ways: First, we employ static analysis and manual code reviews to identify cloud smells in the code base, i.e. potentially risky code constructs regarding cloud deployment. And second, we employ interviews with different stakeholders to investigate whether the application meets requirements regarding the targeted cloud infrastructure.

Examples of cloud smells are:

Further examples of cloud smells are usage of public and static variables (which might preserve state between two service calls and thereby lead to wrong results), accessing the Windows registry or other Windows specific resources (which hinders operation on a Linux machine), or explicit thread management (which usually should be left to the cloud infrastructure).

The following figure summarizes cloud smells that we consider in the cloud readiness analysis: 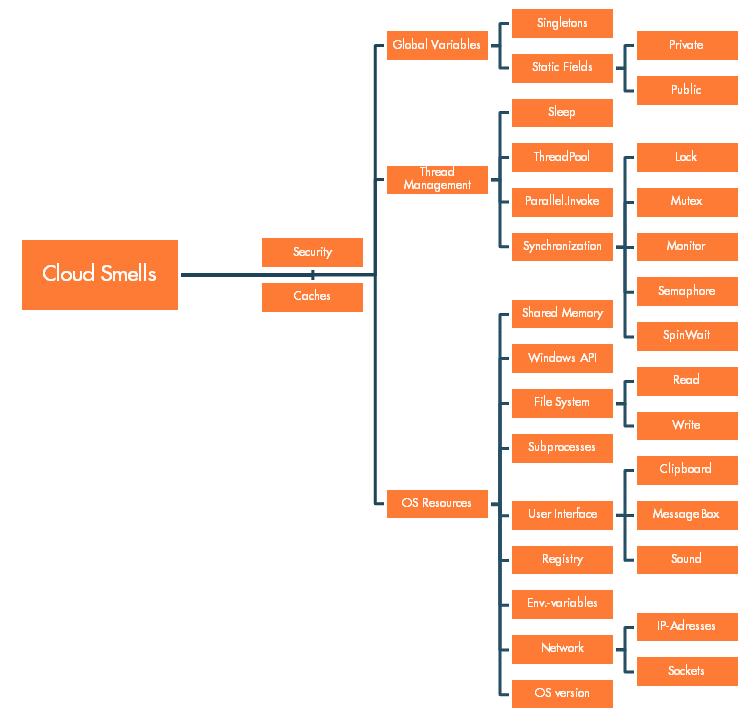 As a first step, we use static analysis checks implemented in Teamscale to identify cloud smells. Afterwards, we manually review (a subset of) the code smells found by Teamscale to validate their correctness, identify generic and risky programming patterns and analyze aspects which cannot be addressed with static analysis alone.

Without a specific application or cloud context, the factors described in The Twelve-Factor App are a good starting point for a list of cloud requirements. Here is a summary of each factor:

This blog article described how we analyze the cloud readiness of an existing application that was written for another target platform in a CQSE software audit. We perform the analysis on two levels: First, we employ static analysis to identify code smells, i.e. code constructs which are inappropriate or risky in a cloud environment. And second, we use stakeholder interviews to study whether the application meets cloud requirements regarding architecture and infrastructure. Furthermore, we identify the third party frameworks and libraries used in the application and analyze whether they are cloud ready, too (see also Popeea: Static Analysis to Inspect Third-Party Library Usage).

Please get in contact with me if you are interested in the cloud readiness analysis or have feedback on this blog article.