Document a concept of the intended architecture

Documenting the intended architecture of a project is easy using the architecture editor of Teamscale. The following conceptual steps can be done using a graphical interface.

The screenshot below shows the Architecture view of Teamscale in «edit mode». The «Scheduler» component is highlighted and the bottom of the screenshot shows the component maps to types from the package core/scheduler/.*. 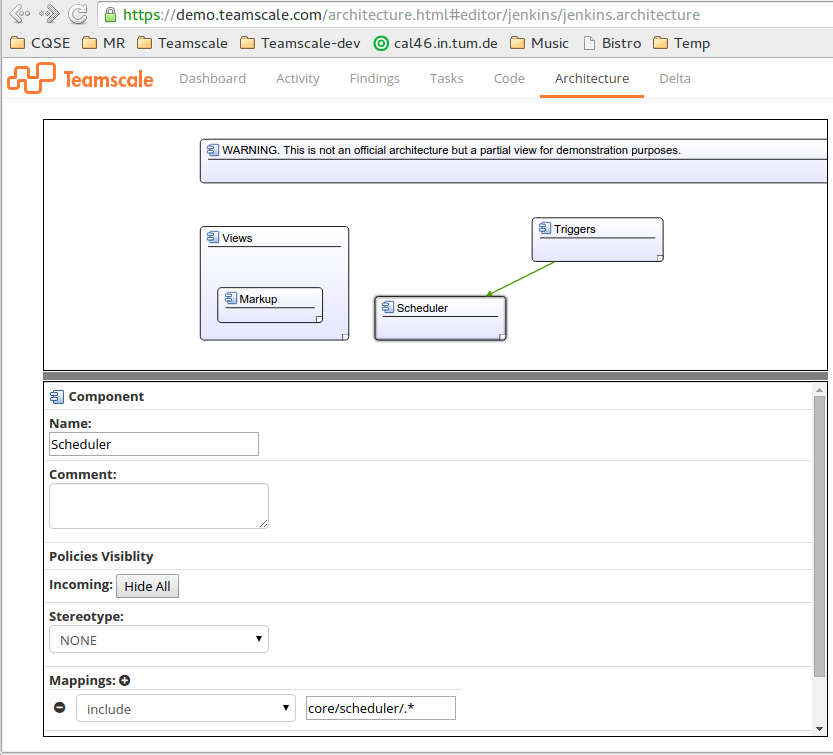 After finishing the edits of the architecture specification, it is stored as a file in xml format and it should be committed to the project repository. Teamscale will use this architecture description to perform an automated architecture conformance analysis.

The following results are produced by the architecture conformance analysis:

The architectural conformance findings that require attention are architecture orphans and violated policies. Resolution methods vary. For architecture orphans the resolution may be either correcting the namespace in which a type is defined or adding the orphaned types to a separate component and defining policies for that component. For violated policies, the resolution ranges from moving some code to a different component to reimplementing the functionality without using features of a denied-access component.

In any case, the resolution methods require collaboration between architects and developers and the new architecture editor feature of Teamscale makes it easy to integrate this process in the development cycle. After each commit that changes either the source code or the architecture specification, Teamscale provides feedback in real-time, within seconds after each commit regarding architectural conformance findings.